Administrators with a high-school understanding of science

Slovenia has a standardized annual exam for high school graduates which is a condition for entry into university.

This year, the organizing committee is pushing preferential Covid-19 vaccination for exam-takers. The vast majority of these are 18 to 19 years old.

I expect most of the medical community would agree it's outrageous to vaccinate 19-year-olds with experimental vaccines whose long-term safety data are not known, and short-term VAERS reports are really bad, for a disease which we know for a fact does not affect 19-year-olds. At best, the vaccines would do nothing. Very possibly, they will do harm. 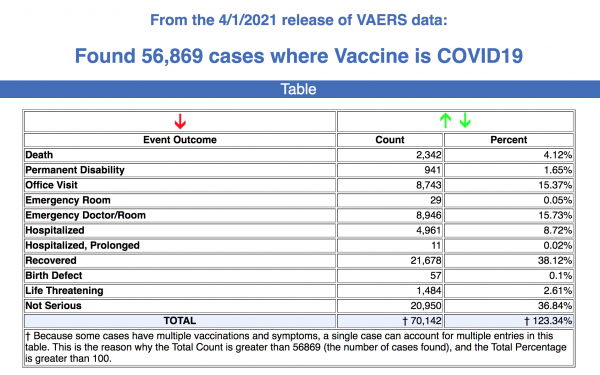 How does it come to this?

High schools teach the settled sediment of science as if it's fact. They do not teach the very real limits of what we know. People who don't become scientists get other degrees and work in other fields. That gives them the confidence of expertise. They think this field-specific expertise also confirms their high-school level understanding of science.

Wherever we look, bureaucrats, administrators and corporate middle managers are trying to push risky vaccines onto people who would be at less risk if they were simply exposed to Covid.

Bureaucrat: "We are having a crisis! We need scientific consensus on what to do!"

Scientists: "Well, we don't have that. In fact, we disagree on fundamental premises."

Bureaucrat: "But we need science to back our decisions!"

Scientists: "The whole point of science is to look in all directions. There is no settled understanding yet."

Other scientists, who have a more nuanced and complete understanding, speak up and say these policies are harmful. Now the bureaucracy feels threatened and applies pressure to silence and punish those who disagree.

The understanding of science by journalists is even more childish. So journalists also ridicule disagreement.

And that's how we arrive at our "consensus." The people with a high-school understanding of science end up deciding which science is credible, to the extent that they revoke professional licenses of doctors and nurses who don't follow. Disagreement threatens the "consensus!" This makes these "dangerous deserters" a threat to public health!

That's how educators end up pushing for experimental vaccination of an entire generation of high school graduates. Young folks that can only be harmed by these particular vaccines. Because science! As understood by the educators.

Jana and I recently learned of the death of Jana's gynecologist, back from when we lived in St. Kitts. We were less than impressed with medical options available on the island, so when Jana went for her gyno exams, we preferred Florida. She was seeing Dr. Michael at the Mt. Sinai Medical Center in Miami Beach.

Since this was a 2-3 day trip, I often went along. I met Dr. Michael multiple times. He was attentive, kind and informative. He didn't over-treat. At worst, he was prone to over-explain, and his staff charged us hundreds of USD for counseling. 😬 We learned to shut him up to save on costs.

He was one of the first to get the Pfizer vaccine. He died earlier this month from complications.

He was a good doctor. Excellent, maybe.

Notice his death was recorded as "natural causes." We can't afford inconveniences to get in the way of "consensus." 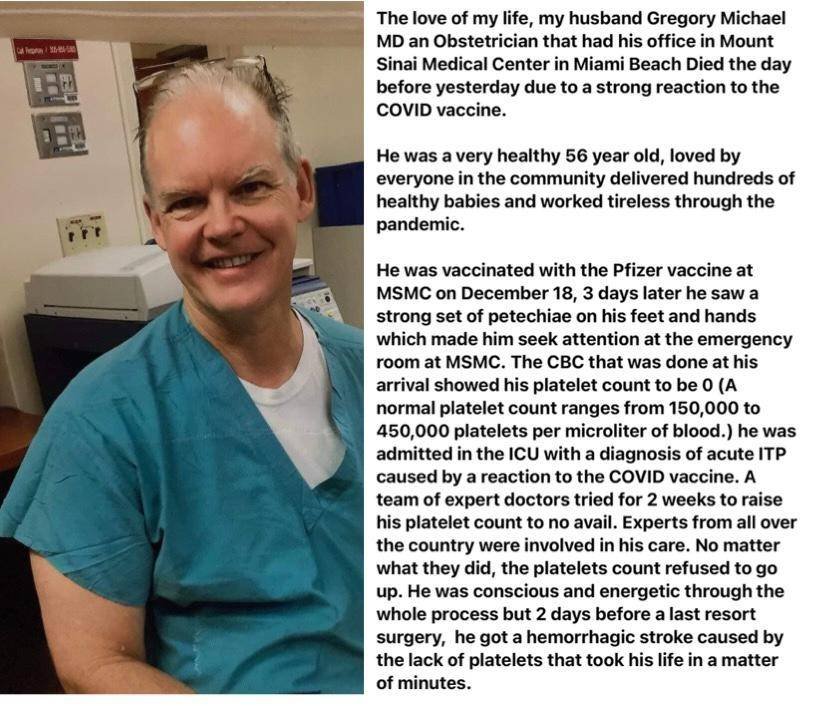