I think we're past social collapse!

March is now almost over, and I'm relieved that:

The power elite want a nuclear war for multiple reasons. Firstly, the Covid-19 injections are causing cancers. This is on purpose. Given the gullibility of media viewers, there does not have to be actual nuclear fallout all over the world. It's enough to wipe out one or two cities, then play that over and over on TV. People believe that masks with holes much larger than a virus can be effective against a virus that spreads as an aerosol. So why not blame cancers in Australia on nuclear bombs in Europe? Weather! Wind patterns! Science!

Secondly: DARPA, the ghastly US military agency that made key contributions to develop the Covid virus and the mRNA vaccines, is now enthusiastically developing "cancer vaccines". What a boon for humanity! They are going to inject you with mystery juice that teaches your immune system to do exactly what it already does every day! In reality, this is a continuation of the Covid injections. If they can make you afraid of getting cancer from "nuclear fallout", that's how you get injected with more juice.

But finally – the loss of life in nuclear war would help them fulfill the numbers of the Deagel forecast; and the deletion of a few cities is a great pretext to invoke martial law.

If it seems that, for the past two years, the governments of most Western countries have acted like they don't care if they ever win another election, this is because they didn't plan on having any. The Covid ride is a ride that once started, must be pushed decisively to completion, or it falls apart. The goal of Covid is to end individual freedoms and convert "our democracies" into worldwide surveillance and compliance states. 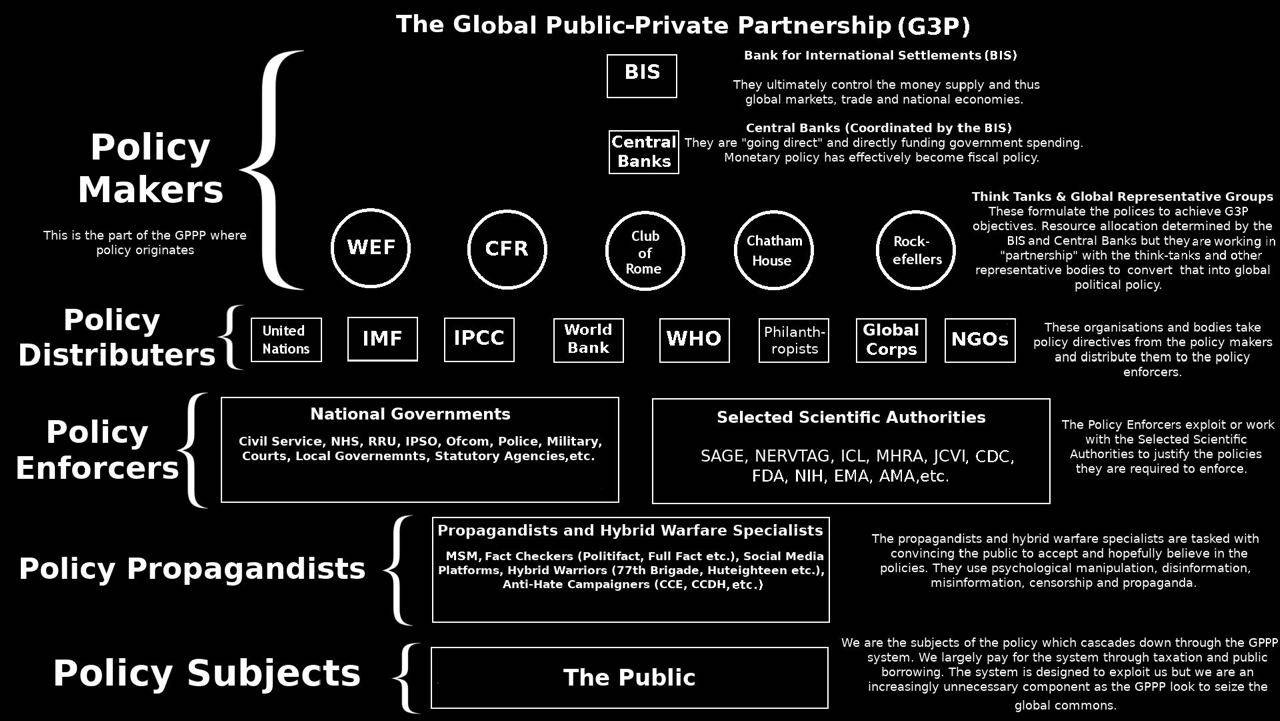 When you look at this picture, understand that you are the "public":

Meanwhile, Mr. Gates, Mr. Rothschild and Mr. Schwab are members of the "private":

Obviously, any sane person would reject this if they knew what is coming, and people are beginning to know. Therefore, martial law could be very useful to end future elections.

I believe there won't be martial law. This threat has passed.

Another excuse for martial law are "bioterror attacks." These would appear to involve chemical weapons, smallpox, or some new virus where the media would show bodies in bags and claim 30% mortality. The same people who believe that masks stop viruses would also believe this.

These "bioterror attacks" would of course be blamed on Putin, but conducted by people like the CIA. Blaming this on Putin would rile up populations with hate. This might allow nukes to be launched in "revenge". Such a nuclear war would have the "benefits" described earlier, in addition to burying evidence.

I don't think this is going to happen any more. Russia found the Western biolabs, presented evidence to the UN Security Council, and is going to present more. Countries like China and India are not siding with Western genocidal maniacs. The maniacs are running into opposition at home, especially in the US.

The maniacs are not in a position to do the "bioterror." They will not be able to invoke martial law, especially in the US, so they will instead try to once again cheat elections.

This year, cheating elections is harder, because way more people are aware. Therefore, Fauci is already warning there's going to be a new variant, with accompanying "restrictions", just in time for ballots.

They are still cheating with the tried and true strategies of mail-in ballots and digital vote-flipping. But this time, they're going to fail just subtly enough that they can hold on to hope that they'll win.

The war against the globalist conspiracy is better won gradually. They are completely willing to annihilate the world if they are convinced they are losing.

They issue our money and have controlling influence in most major corporations. But the economy is ours, not theirs. It is in our interest, not theirs, to preserve its functioning.

The war must be waged in a way where the globalists can't use nuclear buttons. They must believe they can win, and that their apparent best strategy is to keep the economy floating.

So, the globalists will not be defeated quite yet. They will be losing ground gradually. The walls are going to close in on them until they are no longer in a position to inflict critical damage.

For the time being, their genocidal programs will continue. The FDA has approved 4th and 5th Covid vaccine doses. By fall, they are predicting the 6th.

Most people who take these vaccines will dramatically reduce their lifespans. This is the cost of a gradual victory – without quite destroying the world.

I expect that by 2023, the globalists will be seriously without strong options. And until then, their ability to act is going to progressively decrease.