"Cyber Polygon" war games were conducted most recently in Israel with collaboration of the IMF and WEF. 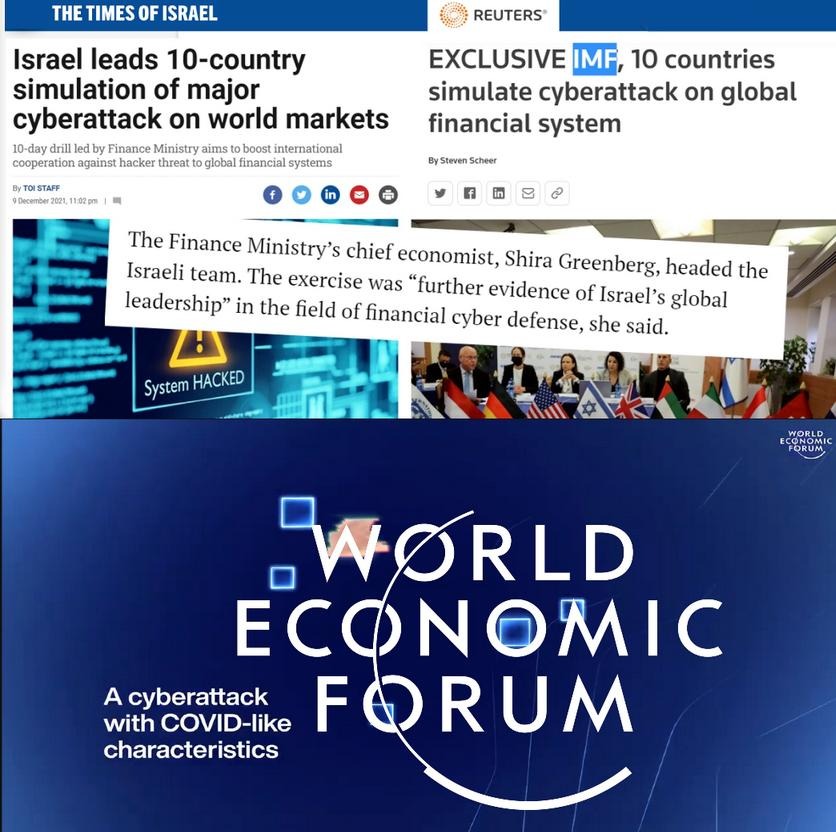 It appears that the powers that be are already trialing large-scale internet blackouts in Canada and Australia. It is common for them to test the most radical measures in their most subverted, most controlled countries.

There is no telling if, and when, the blackouts go live elsewhere. If this occurs, I want to leave you with one good tip how to make sense of reality.

The truth is usually the opposite of what they say

The officially constructed world is a Satanic inversion. They don't simply lie or deny what is true. They double-down in advance. They assert that the opposite of the actual truth is true. Simultaneously, they denigrate the truth by describing it as extremist, radical, racist, hateful, ignorant, and a conspiracy theory.

Most people are psychologically weak, suggestible, easily intimidated, and are only capable of doubting official narratives mildly. They think, surely one or two things aren't exactly accurate. But most of the narrative must be true – even if it's completely confusing and refuses to fit together. The reason it doesn't fit is because reality is soooo complex. Maybe one day, scientists will understand and explain everything.

The golden tip I can give you is:

Embrace the opposite. Assert exactly the reverse of what they say, and you will be right more often than not. This is true for even the most unfathomable propositions.

Claim: "9/11 was an inside job" is a conspiracy theory. Office fires brought down WTC 7.

9/11 was an inside job. WTC 7 was a textbook demolition. So were the big two buildings.

Claim: "The deep state killed JFK" is a conspiracy theory.

Claim: "Covid-19 is a plandemic" is a conspiracy theory.

Covid-19 was planned decades in advance.

Claim: Covid-19 was created in a Chinese lab and released by accident.

Covid-19 was developed mostly in US labs and deployed on purpose.

If everyone used vitamin D, zinc, ivermectin and HCQ, almost no one would get sick.

Claim: Lockdowns and masks are effective tools to control the pandemic.

Lockdowns are to bankrupt small business. Masks are psychological tools to inculcate subservience.

Claim: Vaccines are safe and effective.

Vaccines are ineffective for their stated purpose. They do work for the intent to maim and kill.

Claim: Vaccines are why we are safe from polio.

Paralysis blamed on polio was pesticide poisoning. The polio going around today are vaccine variants.

There do not exist deadly viral pandemics, except as an extreme result of vaccination.

Claim: The Spanish Flu was a deadly viral pandemic.

The Spanish Flu was mass vaccine deaths, explained away as "It must be a virus."

HIV does not cause AIDS. AIDS was injected with mass vaccinations of gays and Africans. They keep it going with treatments that cause the same symptoms as AIDS, and by tainting the illegal drug trade.

SIDS is caused by childhood vaccines and usually happens days after vaccination.

Claim: The cause of autism is a mystery.

Autism is caused when childhood vaccination of genetically predisposed individuals causes fever, which parents then treat with Tylenol (acetaminophen, paracetamol). There is no autism in the unvaccinated.

Claim: Autism is not treatable and is just how some people are.

The symptoms of autism can be resolved in multiple ways, including suramin and fecal transplants.

Claim: A person can be born as a different gender than their body.

Most people railroaded onto transgenderism have a different underlying problem, such as symptoms of autism, which is a vaccine injury. Transgenderism does not help the real issue and often leads to suicide.

Claim: It is possible for a person to change their gender.

It is possible to mutilate your body, become even more depressed and commit suicide.

Claim: "Cancer treatments are being suppressed" is a conspiracy theory.

Cancer treatments are being suppressed because they need you to die of something and make money.

Claim: Access to health care is a human right.

Centrally-controlled health care is to weaponize medicine as a slaughterhouse with plausible deniability.

Trump won in 2016 so overwhelmingly that the usual deep state election rigging was not enough.

Claim: The 2020 election was the most secure ever. Questioning that is a threat to our democracy.

The 2020 election was the most rigged ever. Questioning it is a threat to the power brokers.

Claim: There were no US biolabs in Ukraine.

There were at least 46 US biolabs in Ukraine.

Claim: Those biolabs were only involved in defensive research.

There is no such thing as defensive biological weapons.

Claim: We live in liberal democracies.

We live in simulated democracies which are being turned, on purpose, into collapsing totalitarianism. This is to be followed by a one-world government after a period of population reduction and economic collapse.

Pedophilia, including child torture, murder and sacrifice, is how "our democracies" are run. It is the basis for blackmail of important figures to ensure their consistent compliance.

Claim: Our governments want what's best for us.

Our governments spent the last 50 years plotting to reduce the population while preserving the elite.

Claim: Our corporate media are a heroic, independent bulwark that safeguards our democracy.

The corporate media are controlled propaganda outlets that serve the power brokers.

Big tech is an arm of the deep state for mass surveillance, narrative control, influence and nudging.

Claim: Alternate media spread misinformation which is hateful and harmful to health.

Alternate media are the go-to source for life-saving, true-ish information.

Claim: We must restrict freedom of speech to stop hate, racism and harmful misinformation.

Restrictions on freedom of speech are to stop information which threatens the New World Order.

Claim: Chemtrails are a conspiracy theory.

Geoengineering has been used for decades to achieve economic and political ends.

Claim: Climate change due to CO2 emissions threatens our civilization.

There is no climate change due to CO2. There is geoengineering and the solar cycle. Global mean temperatures can be fully explained by just two factors: solar irradiation and atmospheric pressure.

Ocean levels have not moved for centuries, despite our relatively inconsequential CO2 emissions.

You get the gist.

Everything you've been told is wrong. If it's published in The Economist or The New Yorker, it's a lie. Usually, there is just enough truth so you don't see the lie.

Showing 1 out of 1 comments, oldest first:

Ray Horvath posted a link to this incredibly interesting article by Jim West, originally from April 2020 (archived), which hypothesizes the Covid pandemic was jump-started using cyanide and EMF, and then sustained with other approaches like fraudulent testing:

"The pandemic trigger was a global decision to allow refineries to release higher levels of cyanide into the atmosphere and into the natural gas fuel stream. Cyanide is normally emitted from refinery converters ("crackers"), because converters generate cyanide from nitrogen compounds present in the oil. However, fracked oil can contain 20x higher levels of nitrogen compounds, and thus the necessity to dump cyanide into the atmosphere and fuel stream is pertinent to fracked oil."

"Hydrogen cyanide (HCN), is a highly toxic gas, a refinery waste product. It can cause symptoms similar if not the same as COVID-19 symptoms, such as coughing, hypoxia, lung and kidney damage."

This would explain why Houston, TX, for example, was especially hard-hit; while Dallas / Ft. Worth, in comparison, was not.

"The West Nile "virus" pandemic of 1999 was similar to the COVID-19 pandemic. Both are flu-like diseases that mainly threaten older people. My published research found toxic MTBE (methyl tertiary butyl ether) at 15% of gasoline in epicenters, with this unknown to the general public. The EPA recommended MTBE for ban at the height of the epidemics in 1999. MTBE began a slow phase-out. The West Nile pandemic diminished over the years.

Like COVID-19, air pollution data correlated with West Nile disease incidence and positive test results. Symptoms of West Nile disease are the same as air pollution symptoms. The West Nile virus is an unproven entity. NY DEC told me that MTBE was regulated at the refinery by “discretionary letter”. A DEC scientist told me that they (DEC's Ward Stone of the State Wildlife Pathology Laboratory) changed their avian necropsy reports from "industrial poisoning" to "West Nile virus" because of (as he briefly laughed) the obviously heavy-handed politics that were going down -- daily headlines screaming "Deadly Virus", and helicopters spraying pesticides over the city.

Like COVID-19, all epicenters were downwind from oil refineries. Seniors were most affected, yet diagnostics were defined with an age range biased towards seniors. ABC News reviewed the study August, 2001, after vetting. The Townsend Letter for Doctors and Patients subsequently published the study."