The Dimming: Documentary by Geoengineering Watch

Chemtrails are a "conspiracy theory," right?

In March 2021, Geoengineering Watch released this documentary. It is concise and packed with information:

Just seeing the first 9 minutes will decisively confirm what we didn't want to know.

From 7:00 - 8:00, they explain they acquired a NOAA flying lab – a research aircraft. They tested at altitude to confirm the chemical elements showing up at the surface. They sampled through the layer of trails in the sky, and found the same elements as listed in climate engineering patents: aluminum, barium, manganese, strontium, tin. The same elements had been found in tests of precipitation from all over the Earth.

Subsequent tests showed higher and higher amounts, continuing to escalate until one of the tests was 3,450 aluminum parts per billion. This is highly toxic rain, and a likely contributor to extinctions of species.

In affected regions, these trails are blocking 60-80% of the Sun's energy from reaching the ground.

These programs were first deployed at scale after World War II. They began over the polar regions, to increase the size of the polar ice caps and thus regulate Earth's temperatures. The spraying is cheap.

It's known to be profitable, but toxic. "The long-term potential for economic gains through weather modification cannot be denied." [...] "The known effects on the target areas are almost uniformly adverse."

In public, these programs are described as "hypothetical," meant to combat "global warming." In reality, this has been going on for decades, by the "national security" state, for geopolitical purposes.

David Keith: "So if I made a decision, or if there was a collective decision to do a geoengineering program, and you put, say – the kind of program I think makes more sense is about a million tons a year – you might end up killing many tens of thousands of people a year as a direct result of that decision." Keith says this as an argument in favor: he is featured on talk shows as a public proponent of this "totally hypothetical" thing. "And by the way, it's not really a moral hazard, it's more like free-riding on our grandkids."

Dr. Hamid Rabiee, neurologist: "In the past 5 years, I have seen the number of patients with Alzheimer's disease, Parkinson's, other neurodegenerative diseases tremendously increase – almost quadruple."

If they've been doing this for decades, and there was "climate change," it would be solved – if this was a way to solve it. But the reason to do this is power, and "climate change" is a pseudoscientific whitewash.

If you understand the vaccine-based democide, how it has origins way back in the 1970s, then the question "How could this be going on for decades, without us knowing?" becomes trivial. As we can fully appreciate now – our currencies, our media and our "democracies" are controlled. They have been gaslighting us for longer than we've lived. I had vague glimpses, but I did not dare imagine the whole thing before Covid.

Go ahead and watch!

Wildfires as a weapon

Another recent video by Geoengineering Watch shows how the US military studied, documented, and is using, forest firestorms to achieve goals unrelated to environmentalism: 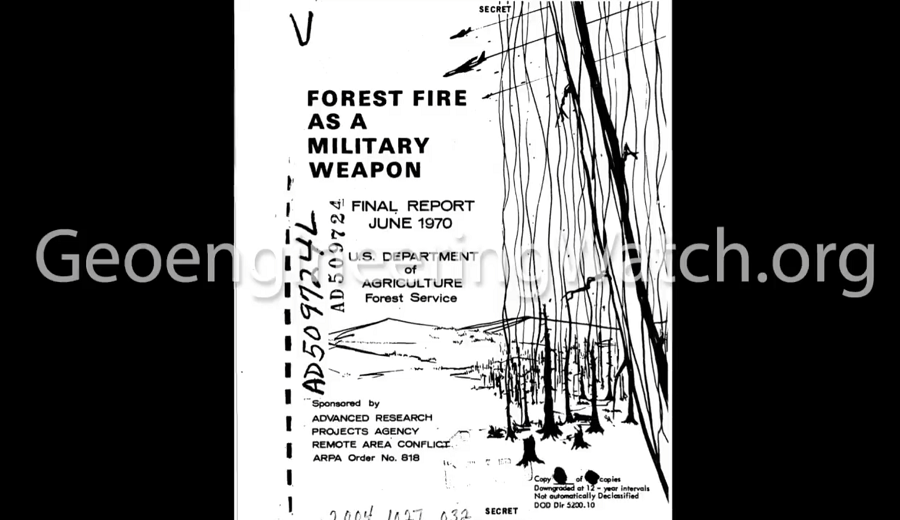 First, forests are poisoned using aluminum and other chemicals so that the vegetation dies, dries up and becomes useful for burning. Then they start fires using strategically placed incendiaries (or now, from air).

The idea that this "combats climate change" is laughable, since the planet is not warming (middle of article: search for "USHCN"). This is an attack on human population, and goes hand-in-hand with the vaccines.