CDC is hiding cancers until a nuclear excuse

The Ethical Skeptic has been conducting an ongoing investigation into how the CDC is sweeping an alarming rise in cancers under the rug: 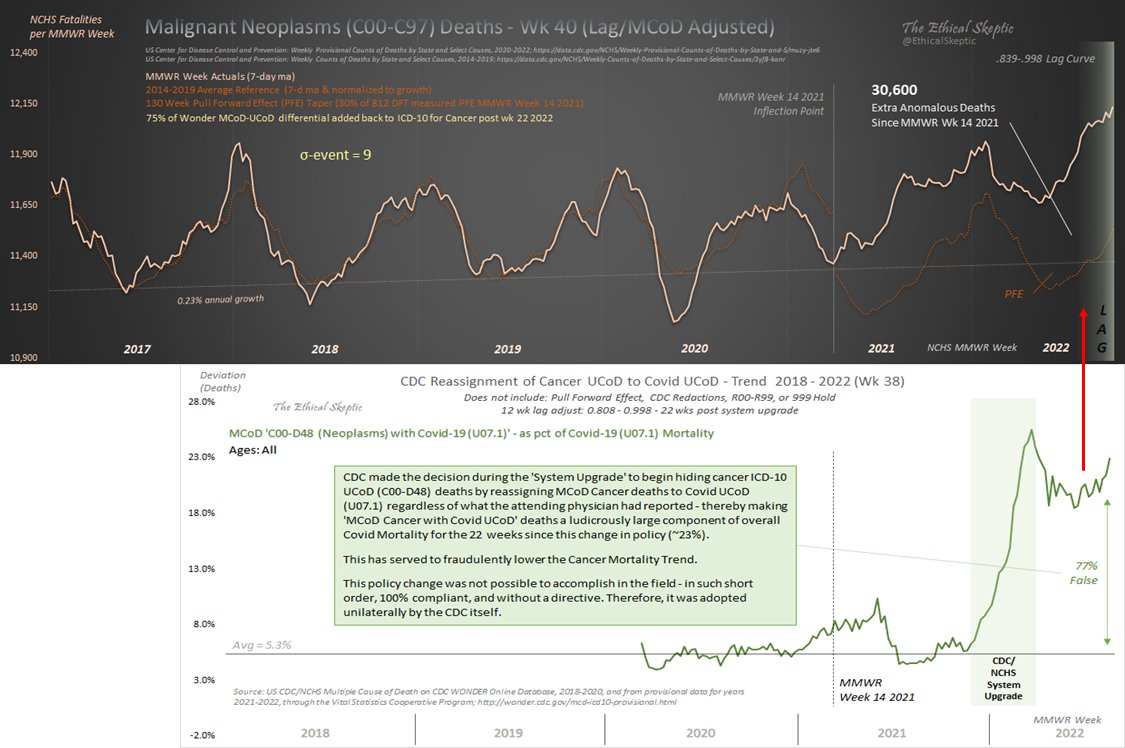 9 standard deviations means this rise in cancers is completely implausible without a new, specific cause. The obvious one is the worldwide campaign of mass coerced injections. Corporate media, tech companies and world governments are behaving in dishonest, nasty and coordinated ways which cannot be explained, except by a dogged determination to ensure widespread deaths. They are willing to settle for nothing less. But to achieve plausible deniability, these deaths must come about in a variety of ways.

Among other known and plausible mechanisms of action, these injections are causing cancer. Doctors and pathologists report a radical increase in unusual, aggressive cancers. These occur especially in young and healthy people who were vaccinated, where such cancers were unseen before.

A friend of a friend died in June/July, post-vaccination, of aggressive metastatic lymphoma. He was 33 or 34:

June 20: "He’s been very obedient and has all the shots... after the second dose he developed some sort of pneumonia and, has been losing weight and coughing non stop for about 2 months now..."

"He got surgery last night, the cancer was all over"

"Basically he had been in and out of the hospital for a couple of months because of pneumonia... on Monday he couldn’t breathe, went to the emergency room and on Tuesday they said it was lymphoma. Yesterday they tried to do a biopsy and his liver kept bleeding. Then he was transferred to the ICU, surgery..."

"How can someone be literally a 'walking cancer' and for months 'no one noticed'?"

The culprits have arranged for themselves a perfect legal immunity – everything they're doing is "legal" – but they lack immunity to ropes. Once people realize what has been done to them, the ropes are coming, legal immunity or not. The culprits are aware of this imperfection. Therefore, they need a way to stave this off.

What kind of misdirection could possibly work? Behold:

"There is already a thermonuclear charge in Mykolaiv which will be designated for use in a provocation. One can assume that the explosion of that charge against the background of NATO and the US's constant claims that Russia is preparing to use nuclear weapons, on the eve of that offensive, or during that offensive, in order to say that because Russia is suffering defeat it has conducted a strike on Ukrainian forces, which will end in tens of thousands of civilian deaths. This will allow the USA to justify large-scale missile strikes on the territory, on our troops in those regions, and on Russian territory. That's to say, essentially justify the US entering into war against Russia."

Map of the relevant region: 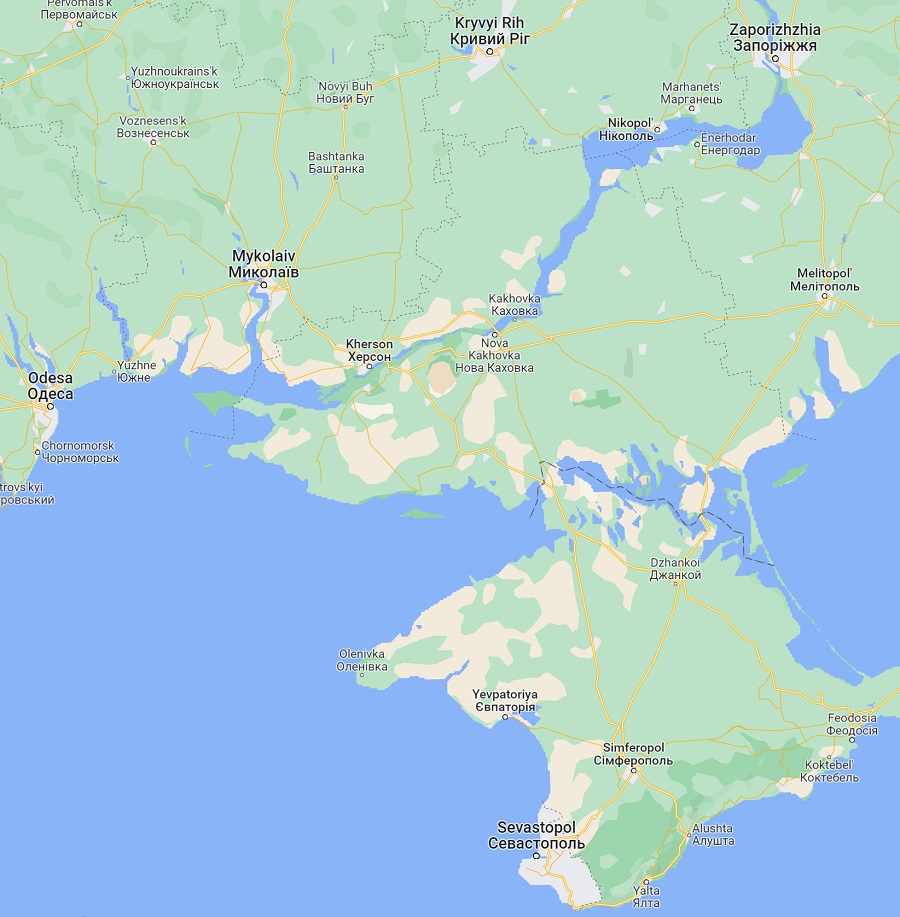 Mykolaiv is controlled by Ukraine. Russia controls Kherson. Ukraine is conducting an offensive on Kherson.

This is after Ukraine spent weeks shelling the Zaporizhzhia Nuclear Power Plant, even endangering an IAEA visit. Western media blamed it on Russia. Because of course, Russia would try, and somehow incompetently fail, to blow up a nuclear plant which they control, which they had seized on purpose to protect.

Just like we're told that Russia must have blown up their own Nordstream pipelines, into which they invested billions, when they could have just turned off the gas, and use the pipes later again. Even after Biden said in February "if Russia invades," the Biden administration would "bring an end" to Nordstream by any means.

They need a nuclear provocation, and they need to pin it on Russia. So for 8 months now, the media have been creating a ridiculous impression that Russia is evil and desperate, and Putin is dying and insane.

Russia took 8 months to start destroying civilian infrastructure. They only did this after seeing no better way. Every step of their campaign so far has tried to minimize civilian deaths and destruction.

The US starts its every campaign by obliterating infrastructure. In Iraq, they destroyed it using "Shock and Awe" with non-stop bombing over the first 3 days. Serbia suffered the same fate, and still resents the US.

We live in a regime which folks mistake for the "Free West." If this regime can have their nuclear event, you can bet that all the cancer in the world is going to be blamed on it. Then, the CDC can stop hiding the rise in cancers. Instead, the cancers will be all over the news, and they will start pushing mRNA cancer vaccines.

Avoid vaccines and drugs of any kind

You are the only person who has ever healed you. You always have the ability to heal. Anyone else just has the ability to suggest health to you, using words or a ritual. When they suggest it, they can persuade you health is possible, and so you can choose it for yourself. But modern "doctors" do not even suggest health. They railroad you onto a map of illness and disease which, if you accept it, leads to disability and death.

Avoid tests and doctors unless you're dying, or at risk of becoming disabled. Avoid pharmaceuticals. Statins and SSRIs are useless and harmful. If you're dependent on them, find a way to slowly and safely stop.

Avoid over-the-counter drugs, especially Tylenol. It's also known as acetaminophen and paracetamol. People take it like candy. It's part of over 200 "medications." It causes harm, especially after vaccination.

All vaccines were always bad for you. If your child has allergies, ADHD, autism, a chronic disability or an auto-immune condition – if God forbid, your child died – chances are as good as even that this is from childhood vaccination. All of the denials of vaccine harm, which I and others previously believed, are not just unscientific. They're evil. If you still believe that some vaccines are good, this is a clear and present danger. They can cripple you and kill you. In vaccines after 2020, we can in fact presume this is the intended effect.

Take a look at how Justin Trudeau is "concerned" about your health: 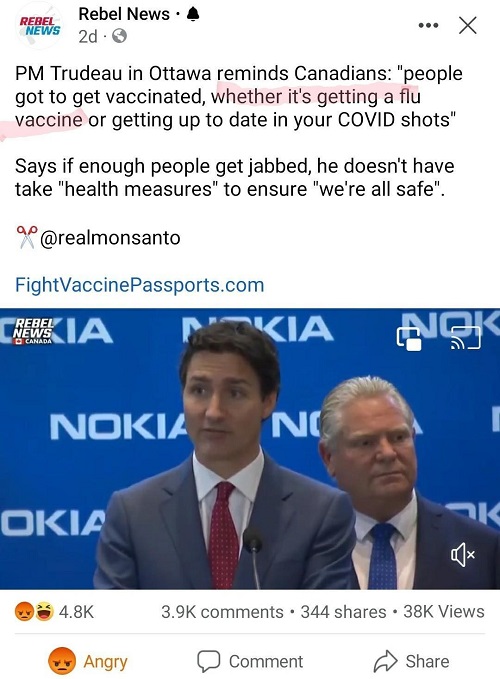 Son of Castro doesn't mind if you get a Covid booster or a flu shot. You just need to get a shot. Or else.

You should expect that both injections will have similar effects on you. If you take one, you might as well start putting your affairs in order, and make sure you have a will in place.

And it makes no sense to put people in your will if they are also injected.